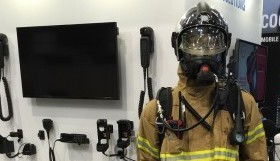 I have been wondering about the future for critical communications so in May I attended Critical Communications World in Amsterdam, and this included the TETRA World Congress. TETRA is a standard that we developed in ETSI in the mid-1990s for the blue light services. It was based on GSM with enhancements required for public service, such as push to talk, group communications, mobile to mobile direct working etc., It is still widely used, mostly within Europe but also a few other countries outside, such as Brazil and Hong Kong.

I was there to chair two days on the sessions on cyber security issues, as well as giving a presentation and moderating a panel discussion. The venue was interesting, and looked like a bouncy castle. There was a large exhibition and a formal conference stream.

Very little enhancement has been made since the first design, with TETRA 2 fixing some of the issues from the first release. The data rates supported by TETRA are still very, very low indeed. It was released with a rate of just over 22 Kbps (almost the same as good GPRS in GSM) and TETRA 2 supports just over 100 Kbps (similar to EDGE). The point was made well that many of the experts who had developed the system are now grey-haired or retired. Indeed, we saw a few retirements during the week! There were not many new people getting involved in the Standards, with the previous experience and knowledge to enhance it, rather similar to GSM for railways (GSM-R) which also got a mention a few times.

TETRA is certainly not dead, and an interesting development this year was it being adopted within the USA, Admittedly only for a few customers, but the with the potential to grow.

The biggest challenge seems to be to support the data rates required by the emergency services: It was interesting to see how some of the apps developed could still run on the old system, but there were also many hybrids on the show, such as handsets that supported both TETRA and Android and used TETRA and 3G/LTE for the backhaul.

There was interesting example of a radio data unit in use in Finland, which had number of 3G/LTE receivers, and chose the best service provider to overcome this problem of high speed connectivity, but of course this needed multiple SIMs as well. There is also the question of the radio frequencies, with the present TETRA systems providing broader coverage at the lower frequencies compared to the 3G/LTE ones in the GHz spectrum.

There is also the challenge of the change from a dedicated system, to one provided by a public operator. In some countries such as Finland TETRA is run as a national service by the government, and they allow multiple selected users: The move to a public network raises issues such as resilience, coverage to everywhere including out to sea, availability, Quality of Service (a challenge with present 3G/LTE for example).

There are also security issues such as denial of service, and separation or sensitive information from the public information also being carried. Think of the issues where criminal photographs exist on the handset, and somebody could accidentally post them on their personal social media account. It is possible to effectively split the single network into two virtualized networks, one for public, and the other for emergency services. This still has security risks, as the core network is still the same, and there are security issues with a virtual network. You could also offload critical communications onto a different technology in an emergency, for example 3G and LTE: Even this has security issues such as jamming or denial of service issues.

There are standards being developed within 3GPP SA6 (3GPP are responsible for GSM, 3G, LTE and 5G), which will provide possible solutions, and allow TETRA type systems to migrate to a public 3G/LTE network. At the moment there are hybrid solutions available, and these seem to be in use in countries such as Finland and the Netherlands. The Finnish stand had a particularly impressive display of an integrated system of all their services, with live data such as positions and incidents of all their emergency services, with border guards as well as police ambulance and fire and private ambulances. This used the hybrid solution of TETRA and 3G/LTE, and the live moving display of all their services and incidents was very impressive, which was available in every vehicle.

Within the UK the decision has been made to move to a system that doesn’t use TETRA, but uses a public operator, on 3G/LTE, it will be interesting to see how this develops, as it is the first network to do this. From my point of view, I can see many security issues where a sensitive system runs on a public service, which will need to be addressed. As they used to say in the TV program “Yes Minister”, a courageous decision.

The use of public networks has a particular challenge, and security in a hybrid system with good separation of the handset and networks makes sense: I have seen many of the security issues from my years of involvement that arise in a public network, which is open to scrutiny by potential attackers, and who have the means to access it. No security system is perfect, so there will need to be constant monitoring, tinkering and improvement. These security issues, my particular field of interest, will no doubt keep us all gainfully employed for many more years!

So to answer my question, Is critical communications in a critical state? I’d say not critical yet, but being called up for the operating theatre, as new solutions to give to give the users what they want have to be developed: People are used to on their own Mobile phones with a rich suite of services and using WhatsApp is not enough to replace TETRA!! I’ll watch the experiments and development with interest.